Here are a few videos I shot in the afternoon of the wildfires Labor-day Monday, September 5, 2011 near Bastrop.
Three Blackhawks scooping up water from the river and then flying over my head to dump it on the fire near Bastrop, TX. Each helicopter probably had took less than 5 minutes for each round trip.

The National Guard is short handed and short on aircraft but doing their best to put out the fires.

"600 gallons, or 4,998 pounds per bucket. 2 hours on station at a time (plus flying time to and from refuel point), as many turns as you can get and up to 8 hours a day flying time authorized - per bird. 43 buckets average per flight (if the dip site is close), times 3 flights in an 8 hour period, times 5 birds = 387,000 gallons of water, or 3,223,710 gallons - dropped exactly where you want it, and where trucks and fireman can't always safely reach."
Timelapse.
Each clip took from 10 to 20 minutes to film. Views from different areas West of the fires
Posted by Shattered Shutter at 2:27 PM No comments:

Some bands I like & photos I took of said bands. 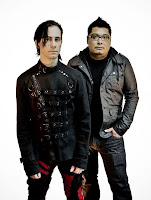 Mr. Lewis and the Funeral 5

There's surely more to come.
Posted by Shattered Shutter at 5:12 PM No comments: